In her first solo exhibition at Rosamund Felsen Gallery, Karen Liebowitz presents a series of paintings and drawings from her Manifesting Prophecy Series. The paintings are hybrids of classicism and fantasy and present an invented mythology constructed upon traditional religious occurrences recast with contemporary female protagonists. Throughout the series, human intervention is called upon to make the magical happen.

This particular group of paintings focuses on the Leviathan, a biblical sea monster that some believe appears in apocalyptic times. These paintings function as a prologue to the story of the Leviathan depicting the “creation” of the sea creature, the making of a net for capture and riding the creature after it’s capture. The symbol of an impending apocalypse seems only more relevant as we find ourselves in a period where ancient religious structures are in conflict with a divergent social order.

Liebowitz is a recent graduate of the UCLA Master of Fine Arts Program. She has received fellowships for the Skowhegan School of Painting and Sculpture, The Ragdale Foundation, The Vermont Studio Center, and a grant from The Durfee Foundation. 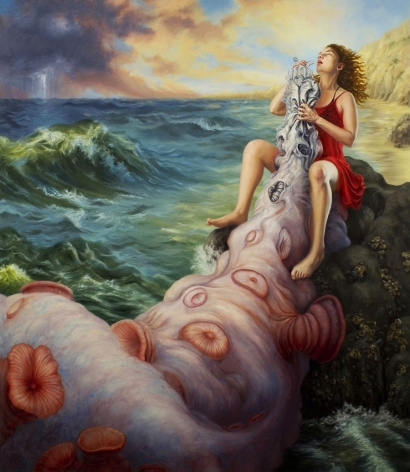 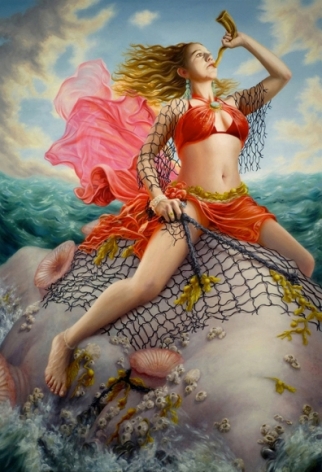 Realism, with a dose of whimsy

Karen Liebowitz's paintings of pretty women mending fishing nets, riding leviathans and blowing up inflatable pool toys blend classical mythology and pop culture in an ambitious mixture of fantasy-fueled Realism. The combo is loaded: provocative, promising and pointed, yet a bit too pedestrian to get viewers to suspend disbelief and abandon themselves to the pleasures of these beautifully painted pictures.

Two gigantic oils on canvas anchor Leibowitz's exhibition at the Rosamund Felsen Gallery. The first features five bikini-clad babes perched in a sea cave, where they repair rips in an old-fashioned fish net. Bright sunlight pours in the heart-shaped mouth of the cave, bathing their bodies in a warm, sexy glow. Each appears to be lost in her own thoughts, like Penelope unraveling her daily weaving while she longs for Odysseus, or a world-weary twentysomething waiting for the sun to set and the clubs to open.

The second image depicts a young woman in a red negligee and black bra sitting on a barnacle-encrusted rock as the frothy surf licks her toes. A lightning storm blows in from the horizon as she parts her lips, closes her eyes, tips her head back and prepares to blow a lungful of air into an inflatable toy.

The toy is the best thing in the painting. At one end, it's a lump of crumped silver-blue plastic, gripped tightly by the light-headed heroine, who just might be in ecstasy. Its other end is a sea monster's tumescent tentacle, covered with rosy orifices and extending beyond the image's edges to suggest a beast as big as anything Jules Verne envisioned. Between the two ends, Leibowitz handles the transformation from inanimate object to monstrous mollusk with aplomb, using glistening, viscous pigments to bring fantasy to life in ways that are at once seductive and scary.

Two sofa-size paintings show the creature in action. In one, a surf chick dressed like a mod belly dancer blows a ram's horn as she rides the beast with the confidence of a rodeo champ. In the other, she hangs on for dear life, no match for the imaginary animal's awesome power. In both, the monster steals the show, its purplish hide pocked with flowery suction cups and dripping bits of golden kelp.

Thirty small studies -- in charcoal, watercolor or oil on panel -- reveal various stages of Liebowitz's process: tightening compositions, trying out different settings and refining the figures' postures, gestures and expressions. All lead to the four big paintings, where the 32-year-old artist has room to strut the stuff she does best.

It involves an ethos of earnest workmanship -- or painstaking craftsmanship -- married to a sense of campy preposterousness. Think Margaret Nielsen meets Carlo Maria Mariani. Or John Currin without the breathless reverence. Or Lisa Yuskavage with greater emotional range. Or Rebecca Campbell without the ambiguity.

Leibowitz has not worked out all the kinks in her attempt to make paintings that are heroic and both timely and lasting. But she shows herself to be a painter worth watching, an artist unafraid to take big risks and with the talent to meet them.