Gouache and ink on paper, framed

Gouache and ink on paper

Rosamund Felsen Gallery is pleased to present a solo exhibition of new work by Nancy Jackson. This will be Jackson's sixth show at the gallery, and her first West Coast exhibition in more than 2 years.

Nancy Jackson has long been known for her unencumbered use of material and the intricacy of craft in her work.  For this exhibition, Jackson delves deeper, and with more dynamism, into the implications of such a practice, looking intently at how depiction (and its various modalities) is often paralleled by our own experience, one moment deeply intuitive and the next highly reflective.  Jackson's work draws influence as much from folk art as from canonical masters, her practice itself alternating between an embodiment of the naive artist and a highly rigorous co-opting of historical output, resulting in an exhibition that is punctuated by moments of both the individuated and communal.

The exhibition takes shape as Jackson installs a series of large-scale, highly intricate, multi-part mobiles which will hang from the rafters in two of our gallery spaces, while the third space will be devoted to Jackson's ultra-detailed drawings, paintings and sculpture. 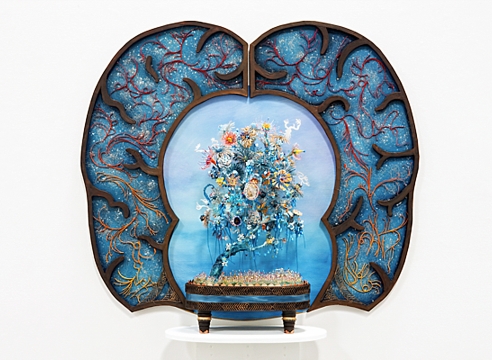 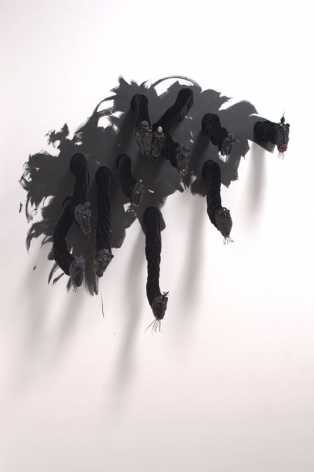 Nancy Jackson’s latest exhibition, her sixth with Rosamund Felsen Gallery, was a lighthearted tour de force consisting of seven paper mobiles, at once intricate and majestic, nine works on paper and 12 sculptures. The keen balance of intellect and intuition Jackson has displayed in prior exhibitions was here injected with levity and wisdom, revealing another facet of an artist adept at using fantastic imagery and meticulous processes to probe psychological mysteries and metaphysical dramas.

Untitled (Large mobile), 2010, is 22 feet high, and it stretched from ceiling to floor. The all-white work is made of plastic rings strung together with thread, one above the other, each hung with cut-paper shapes, thousands in all—curlicues, discs, moons, arrows and the like, all in rhythmic patterns. Peeking out from the bottom is a solid glass object; shaped like an upside-down exclamation point and surrounded by a fluff of monofilament, it resembles a sea creature and exudes a playful sexuality. In the same room was a small gouache and ink on paper, The Way it Works (2009), in which a lush plant, its juicy green leaves and delicate pink tendrils bursting from a thick stalk, erupts from a mountain of human skeletons. The undulating shape of the plant mirrors that of the mobile, and their actions are reciprocal—one descending gracefully, the other reaching energetically up.

Six equally elaborate mobiles, each about a quarter the size of the large one, occupied a second room, along with a wall sculpture, Untitled Heads 1-11 (2010). In the latter, 11 shiny black papier-mâché-and-clay masks sit in the end of springy velvet-covered tubes that stretch into the room like serpents. Each face, about a foot high, sports a set of pointy white teeth, a bright red mouth and a quirky hat. In the context of the artist’s interest in psychology and dreams, the creatures connote anxieties and neuroses, yet their grins suggest mischief. The area of the wall on which the heads were installed was painted in broad swaths of matte black; the immediacy of the brushstrokes struck a balance with the labored intensity of the mobiles.

The dreamlike narratives of the paintings and drawings in another room have a darker sensibility but retain seeds of optimism. In one four-part ink-on-paper drawing (each sheet letter-size), a turbaned woman snatches a glowing crystal from a stand, only to have it grow back during her getaway. The storyboardlike sequence suggests a parable about a benevolent light. In a small gouache on rice paper, Untitled (NY), 2010, a detailed depiction of an urban street, a torrent of yellow, blue and white lines seems to have replaced the buildings. Is the city being blessed or destroyed? It depends on one’s perspective, but the rest of the exhibition—with the patient process inherent in the hand-cut mobiles and the playful absurdity of the heads—tips the reading toward the benign over the apocalyptic. 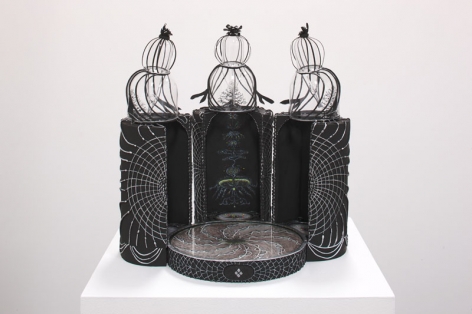 A Tonic Against the Inauthentic

Responding to the sense of alienation in art that she felt had been fostered by modernism, historian and critic Suzi Gablik made a case for “The Reenchantment of Art” in her book by that title, published in 1991. She called for a renewal of art’s social responsibility and moral purpose, a reconnection with its roots in myth and archetype. Though Gablik voiced her concerns about the soulless state of art nearly two decades ago, that despair is just as easily invoked by much of the insular, over-schooled and hyper-strategic work that fills galleries today.

Which is why Nancy Jackson’s new work at Rosamund Felsen Gallery feels so restorative, so truly enchanting. Jackson’s show, as ever, is an event for the spirit, invigorating in its authenticity. A group of mobiles, all-white, floor-to-ceiling cascading rings, dangling dots, loops and fringe, is breathtaking, both blatantly festive and quietly sublime. Made of paper, Styrofoam, aluminum, polymer clay, thread, monofilament and glass, they hint at the mystical and also the musical, while testifying to the fundamental human impulse toward ornamentation.

In one room, six of the mobiles are offset by a group of shiny black, vaguely animal heads on tubular, velvet necks protruding from a painted dark patch on one wall. Comic and grotesque, with sly smiles and ridiculous hats, the pack looks slightly crazed, as if malevolent forces were intruding upon the sanctity of those ethereal, gently twirling white confections, sullying the innocence and purity of the assembly, and playing out a primal conflict between light and darkness. Jackson’s ink and gouache drawings, too, often set beauty against death. Strange, fantastic and darkly funny, they affirm Jackson’s commitment to an art of exquisite craft, complex beauty and a deeply human sense of fear and wonder. 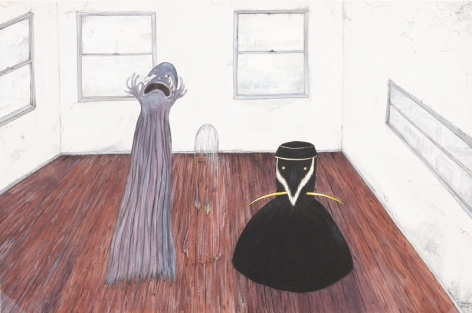 The Fantastical and the Real

Nancy Jackson's work embodies the fantastical, but in her most recent show I wasn't thinking in any way of modern fairytales which skip the difficult parts of life, but of old, ancient fairytales, the kind that A.S. Byatt talks about in The Children's Book as being dangerous.  The kind of fairytales the Grimm brothers collected, and that most parents won't read to their children because fairytales like these are really meant for adults.

And at the same time, Nancy Jackson's work also reminds me of Emily Dickinson's poetry, because it is fierce, lonely, and exultant in its loneliness.  All through her show I was amazed by the sense that I had never seen anything like this before, and that all this was sincere, real, the inner workings of not just any artist's dreamlife, but Nancy Jackson's particular and peculiar dreamlife, laid out with absolute honesty.  Her cat-masks with their long whiskered chins were scary without being frightening, friendly but also sinister and dangerous.  I had the sense, which occurs in the very best fairytales, the ones most sublime and at the same time most true to life, that I was fully enwrapped in her world, discovering that the mobiles spin at different rates when you move by them or breathe on them with some of the reflected power the artist must have felt at the same discovery.  And on such a scale!  Twenty-two feet from floor to ceiling, trailing whiskers and threads and white flower blossoms, and all without ever tipping out of the poetic intensity of the dream.

My favorite pieces in the show (along with the cat-masks) were the drawings, which were a revelation.  They reminded me of Ensor's drawings in their intricacy, loneliness, and also in the scale and style of the work, but without his note of perversion.  The skeletons in the drawings, the autumnal themes brought a note of death into the show which was deeply moving, and appropriate.  It reminded me of what I was thinking about with the skull in Braque's studio---that all artists, to some extent or another, are making art to postpone their death, or to live on beyond death (to not be forgotten)---that they are, in fact, making art for or against death, in preparation for its coming.  Death is an undercurrent in all art, just because it is either passing quicker than we are if the materials are ephemeral, or because we know it will last long after we die, if the materials are lasting.  And at a deep level, art is a way that thought lives on even after the flesh decays.  And I have to admit that the skeletons felt like something out of my dreams, because I used to dream often about skeletons throughout my childhood and adolescence.  But I digress.

What both artists reminded me of, and which I am grateful to both of them for, and which most great art makes me feel, is the sense that even though art is the most refined fantasy, still it teaches us deeply of the real, that it is in fact, deeply real, life distilled and intensified in an object or image. 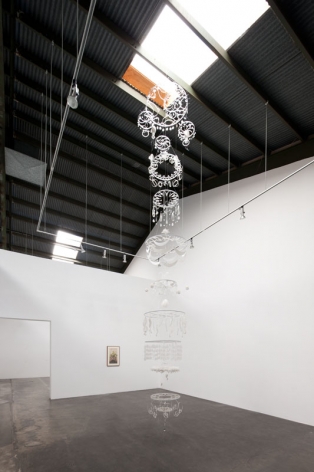 Nancy Jackson's current show splinters in two directions. In her narrative works on paper, detailed drawings and paintings come off as quirky, cutting and humorous. The surprise, however is the multi-part mobiles that hang from the ceiling in the main gallery. White cutouts of flowery, geometric and ornate shapes dangle from one another, spanning the distance from floor to ceiling. These obsessively fantastical and intricate works are both seductive and charming. Each piece resembles a chain of an ornate chandelier (made from light materials) that has been taken apart, stripped of the original context, and fashioned together to become more than the sum of its parts (Rosamund Felsen Gallery, Santa Monica).