Rosamund Felsen Gallery is pleased to present ABRACADABRA, an exhibition of new works by Kim MacConnel.  This will be MacConnel’s 6th solo exhibition at our gallery.  ABRACADABRA features works of brightly colored, high-gloss enamel on board.  The exhibition is made up of large, multi-part pieces composed of small individual panels, grouped and aligned according to pattern and size.   In addition, the exhibition will include a wide range of smaller paintings.

Through the use of patterning, bright colors, and careful attention to surface and material, Kim MacConnel has consistently referenced non-Western and non-art practices and concerns.  In doing so, MacConnel advocates for an expansion and disruption of the norms of previously sanctified high art orthodoxy, even while using many of its tropes.

MacConnel's new work emerges from of a loosely defined set of rules that investigate the iterative process of making work under imposed restrictions.  MacConnel begins with a handful of patterns and panel sizes upon which to paint.  From within the finite number of combinations of pattern and size, MacConnel gets to work, hand-painting each pattern, without masking, often working on several pieces simultaneously.  This part of the process is intuitive and without direction.  Once complete, there are no two pieces exactly alike, the works varying in color and character.  From within a limited set of constraints, seemingly innumerable configurations appear. 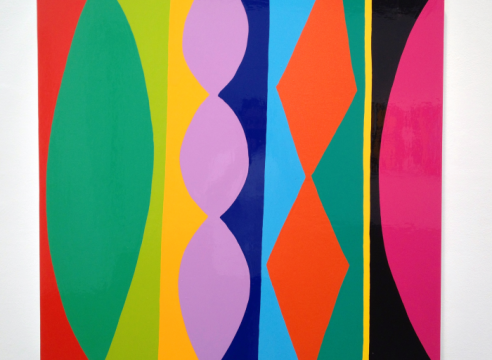 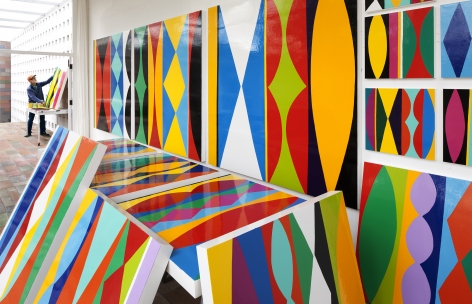 Take one look at the announcement photo for Kim MacConnel's sixth solo show here and you'll know you're in for a riot of color. But not one without structure; MacConnel employs an approach that is equal parts systems and intuition. Each panel is divided into three or four columns, or vertical panes, within which slightly irregular triangles, parallelograms, half-ovals, and the like face off with their respective borders, whether negative and/or positive space. Given suggestive but ultimately minimalist titles such as "Bunny," "Rabbit," or "Dove," his latest bodies of work – including a mural-sized, multi-panel piece that was included in his retrospective "Collection Applied Design," at the Museum of Contemporary Art San Diego (October, 2010 to January, 2011) – have ditched acrylic on canvas in favor of enamel on wood. Are they more finite? Probably. Sexier? Definitely (or maybe it's the other way around). MacConnel has never been shy about wielding palettes of unadulterated primary and secondary colors, though typically he balances in just enough sections of black and/or white to give one's eyes room to breathe; still, they're far from sedated.