Les Biller received his Bachelor of Arts at the University of Hawaii in 1957. In 1960, he received his Master of Fine Arts at the University of California, Los Angeles when he was an assistant professor. He then traveled to Japan with his wife Sumiko, clothing designer and boutique owner. After living in Tokyo where he studied at the Tokyo University of Art, they later moved to an abandoned geisha district of Kyoto near Mt. Hiei. Eventually they moved back to the United States where he returned to teach at UCLA in 1964 until 1975 when he went on to teach at University of Hawaii for many years.

Now, for his first exhibition with Rosamund Felsen Gallery, Biller presents a body of paintings including still lifes, figures, interiors and landscape. In these paintings, lines weave through charming compositions as beautiful objects are celebrated with equally beautiful measure. Choruses of intense, eccentric and vibrant colors sing praises of glistening vases, sensually patterned textiles, and cars resting before the mountainside. Accompanying the paintings of emotive scenes and sensual objects is a series of figure paintings. One set of these portrays the gestural female form languidly luxuriating in luscious tranquil waters, while another displays audacious nudes wrestling with roaring & tumultuous waves.

With all the works painted exclusively in natural light, the overflow of dazzling colors runs the full gamut of the spectrum. Space and depth are implied, lending to more personal and intimate charm while nodding to influences such as Matisse, Monet, Chardin, Picasso and Courbet. Charismatically, the sensational brushstrokes, color saturation, and rational compositions speak of more than the pictorial scenes they make up. Utilizing still lifes, interiors, figures, and landscapes, Biller’s paintings are celebrations of sensations and experience that meditate on the ever changing relationship between color and light and the playful, at times tenuous, and above all romantic interplay between the two. 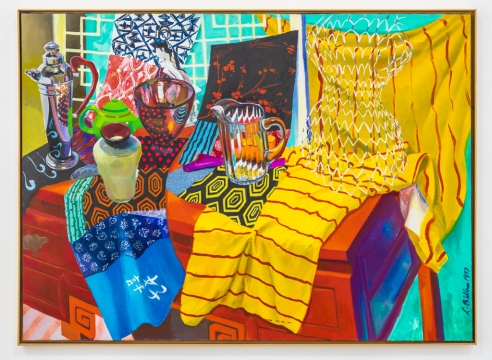